The weather was damp and dismal but that didn’t deter Knowle 2’s going out onto the pitch with the same enthusiasm that we have been accustomed to seeing week in, week out.

The game got underway and it was not long before  Aimee flicked the ball into the back of the net ably assisted by her sister Bry … 1-0!

There was some good passing between the team but the opposition intercepted, came away with the ball in tow and sprinted towards our goal … 1-1.

The second half saw Grace H running towards the opposition’s goal, meanwhile Bry was busy gaining possession of the ball from one of their junior players and with a quick strong pass across the ‘D’ to Grace who then calmly tapped the ball past the keeper … 2-1.

Knowle were determined to keep possession of the ball with Holly undertaking a cracking long range hit that went hurtling into the ‘D’ where Eden was alert at the back post and using the fast pace of the ball she strategically guided it past their keeper for goal number 3.

Man of the match this week was awarded to Princess Bryony who just loves to be seen sporting a tiara!! 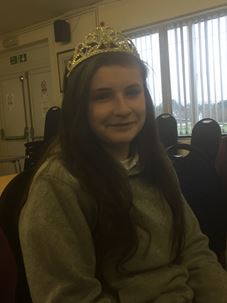 Despite lengthy investigations by Scotland Yard, the FBI, Interpol and the Canadian Royal Mounted Police, Julia was never conclusively linked to a series of high profile international crimes. UK tabloids suggested Julia was the leader of a sophisticated criminal network. In a rare interview Julia said "I'm not admitting anything naughty, but if I did run a criminal operation of a scale to rival some counties, it would have only been because I was bored and hadn't discovered tennis or hockey at that point".